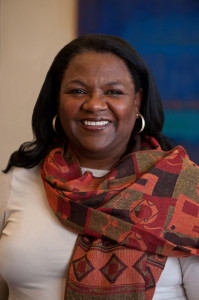 Dr. Regina Stanback Stroud, President of Skyline College was honored at the 5th Annual Mayors’ Diversity Celebration Awards for the County of San Mateo at an awards dinner on Wednesday, October 30th, 2013. Dr. Stroud was nominated for her work in advancing diversity in the City of San Bruno by the Mayor of San Bruno Jim Ruane.

Under the leadership of Dr. Stroud, Mayor Ruane explained, Skyline College worked to develop several culturally based learning communities such as ASTEP and Kababayan Learning Communities. Mayor Ruane also cited the work the college has done to encourage a welcoming environment to effectively serve a diverse population of students and the San Bruno community and how the college has thrived as a cultural center for the community of San Bruno under the leadership of Dr. Stroud.

The Mayors’ Diversity Celebration Awards is hosted annually by the San Mateo County Hispanic Chamber of Commerce whose mission is to promote economic prosperity. Congratulations to Dr. Regina Stanback Stroud for representing San Bruno and Skyline College so well!